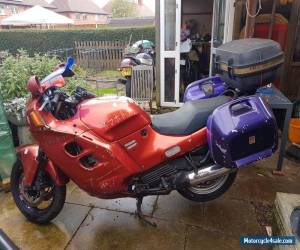 OK here goes.I have bikes and tons of spare filling up my garage and am selling them all to just get the one.I will be listing my full dress CXXXX on Sunday. Here are the other X:
Bike X.XXXX D-reg) CBRXXXXF-H in burnt orange with GIVI luggage.I have owned this bike since XXXX. It has always been that colour.Over the years its got very tatty and scratched and lugs have broken so most of the plastics are held on in places with cable ties. It still passes the MOT like that thoughThe engine had developed the usual rattle, although it ran well.X years ago fitted the later FK engine and new plugs. it still rattles bit though.The battery soon goes flat so probably need new one soon.It starts OK when cold but is pig to start when hot. It like to stall at tickover and doesn't pull as well as it should. would say it just needs the carbs tuning.The bodywork had to be cut bit as Honda moved the water branches from the front to the sides. Its barely noticeable though.Nexxus cans sound good. The right hand side one is well scratched though.While doing the engine noticed that the rear aftermarket shock was broken at its top mount. had genuine one in my spares so fitted that. think its knackered though as it doesn't feel right. have spare swingarm and shock (not pictured) spare so that can be changed.The Purple front wheel has nearly new disks and the purple rear also. The Maxxis tyre on the front had had little use but does leak on the bead bit. It also patters bit over XXmph so may need to have the bead cleaning up and rebalance.. The purple rear tyre had brand new Maxxis tyre fitted recently and it leaked like hell so the tyre is off and the beads on the wheel need cleaning up. the silver rear wheel fitted pretty reasonable rear tyre though.the speedo glass is crazed but there is spare pair of clocks.There is GIVI Wing Rack and GIVI luggage. They all work off of the one key. The purple boxes are tight fit and need fair bit of force to get them on.NEW chain and sprockets fitted in July has had little use.
The engine took out is the one pictured so could go into the other bike. read on!!.
Bike X.XXXX (E-reg) CBRXXXXF-H in multi colours.The previous owner told my it was first owned by Judy Dench. Dunno, never checked and it probably doesn't mean anything anyway!I purchased this along with the FK engine, plastics and into X. See other listings. mainly to get the engine and as spares bike. What you see in the pics is what you get. Its still XX% there though although the tyre are not good and have robbed the rad, grab rail, throttle and switchgear (RHS) and master cylinder.The main fairing body is from XXX Hurricane apparently, hence the tape.The key for the ignition is currently used with the grab rail seat release on the other bike but you can soon swap the back or cut new key.We did try to engine while back and it turns but stops moving at some point in its cycle. Not sure why but of course there is another engine that could go in it.It has original Honda cans and they look to be in really good shape.Plastics as pictured will have the odd lug missing.Currently on SORN.

I have both VX's in may name. cant find the MOT cert for the orange one at the moment. will keep looking for it but you can check the MOT and tax status online these days so its not critical. There was one advisory on the Swingarm looking bit crabby, but as said, there is spare one. Both bikes have just the one key each.
I  have started the bidding fairly low (??XXX) and have very  moderate reserve as don't want to give it away. BIN set at ??XXXX if anyone is really keen and that will stay in effect until the reserve is met.Obviously its collection only although do have single bike trailer so could help with delivery somehow for the cost of fuel but it would be bike at time. am happy for you to turn up with van or trailer or for you to arrange bike courier firm to collectCash or bank transfer is preferred but Paypal at pinch. expect cleared funds in hand before hand anything over though.I would prefer the winning bidder to actually to complete on the deal.
I have tried to be as honest as can but if think of anything else will add it in red text at the end of the listing. Please don't hesitate to ask any questions or to ask for additional photo's.It is always best to come and view first and you will get plenty of tea, coffee or whatever and good chat. located in NGX area of Nottingham.
In picture there is side panel missing. have found it. have also found another rear wheel in white.I have now found the MOT for the Orange bike.Just found an original CBRXXXXF Owners Manual too.
Also published at eBay.co.uk 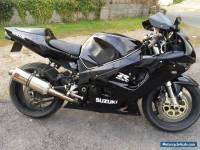 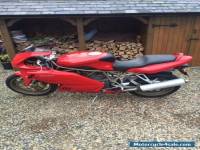 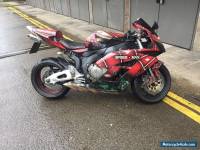 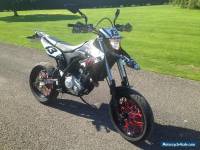 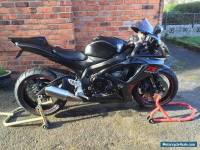